Slapshock produces music as loud and violent as its name. Slapshock is usually compared to Korn, Limp Bizkit, and Slipknot, as the band combines hip-hop and heavy metal to feed the market's appetite for brutal, in-your-face rap-rock. Slapshock formed in Manila, Philippines, on February 14, 1996, with vocalist Reynold Munsayac, bassist Lee Nadela, guitarists Leandro Ansing and Jerry Basco, and drummer Chi Evora. Nadela, Ansing, and Munsayac met at college; they were all attending UP Diliman in the Philippines. Wanting to alter their sound, the group dropped Munsayac and replaced him with Basco's cousin, Jamir Garcia, who had just returned from the U.S. While in America, Garcia had a band called Bruce Lee's Curse and was familiar with the East Coast hardcore rap scene; his background greatly contributed to the direction Slapshock would quickly take. The group built up a following in Manila's underground clubs. The band was quickly lumped in with two other almost interchangeable Filipino acts

-- Cheese and Greyhoundz -- who pounded listeners into submission à la their foreign counterparts. When Slapshock opened for the alternative metal group Wolfgang during its Serve in Silence tour, the band generated excitement amongst angst-ridden teens in the Philippines as well as scorn from conservatives who felt such bleak, blisteringly noisy music was a bad influence on youth. Older fans who believed they were blatant bandwagon-jumpers ridiculed them. Nevertheless, Slapshock's 1999 debut album, 4th Degree, did well. On August 30, 2002, the band performed at the Folk Arts Theater in Manila and became the first rap-metal act to sell out all 8,000 seats in the venue. The band's songs continued to dominate modern rock radio in the Philippines as its third full-length, Project 11-41, was released that year. Project 11-41 displayed some sense of melody, but a number of critics felt that the group was still too derivative to be taken seriously. Despite that, Project 11-41 was one of 2002's most commercially successful albums in the Philippines, and Slapshock was voted Artist/Band of the Year at the NU-107 Rock Awards. 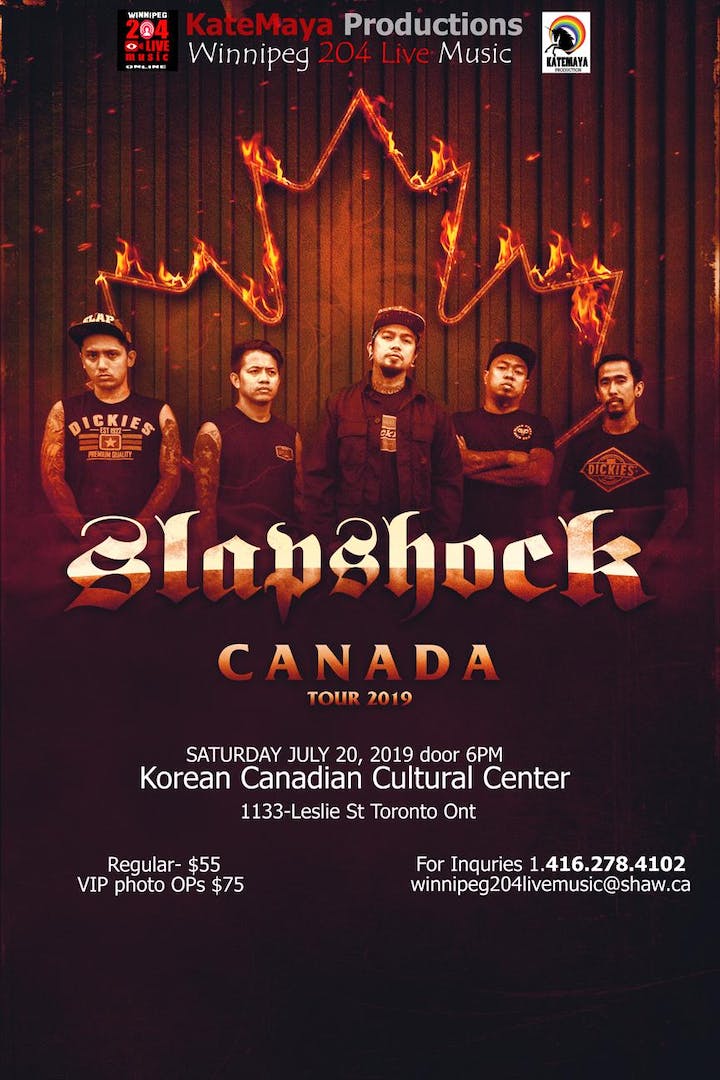 Korean Canadian Cultural Association Of Metropolitan Toronto
1133 Leslie Street, Toronto, M3C 2J6, ON, Canada
Event from
eventbrite.ca
Are you an event organizer?
Create events for free. They will be immediately recommended to interested users.
Create event

1
Wednesday 27 May
Wed 27 May
Management of Hypertension in Non-diabetes Patients with Chronic Kidney Disease - May 27, 2020
Online

eventbrite.ca
Are you an event organizer?
Create events for free. They will be immediately recommended to interested users.
Create event
Check out other events in Toronto

Stay updated on SLAPSHOCK Live in Toronto and find even more events in Toronto.